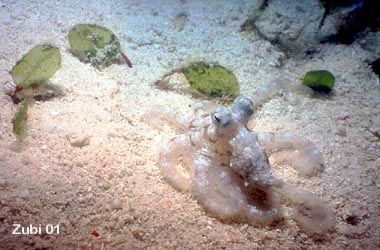 During a nightdive in Cabilao there are always some squids and octopuses around. I saw this small nearly transparent octopus on several occasions. It is around 4 or 5 cm large and lives on sand and in between seagrass. Since its color matching its surroundings perfectly you can only see it when it moves.

Some octopus are extremely well camouflaged, others show flashing colors to warn possible predators. The most famous of these octopuses is the blue ring octopus (Hapalochlaena Iunulata, about 6 cm) which I found in Balicasag, Bohol. I know, this photo doesn't show much of the octopus, but it is the first time I saw one and the only photo I could take before it disappeared in a crevice!

The salvia of blue-ringed octopuses contains a powerful nerve toxic that blocks nerves from transmitting messages to the brain. The victim's voluntary muscles (involuntary muscles such as the heart, iris and gut lining continue to function) are paralyzed. People die then from lack of oxygen. If mouth to mouth resuscitation is given, the victim recovers fully. Blue-ringed octopuses are shy and not aggressive, they tend to avoid people (not their natural prey - much too big!). 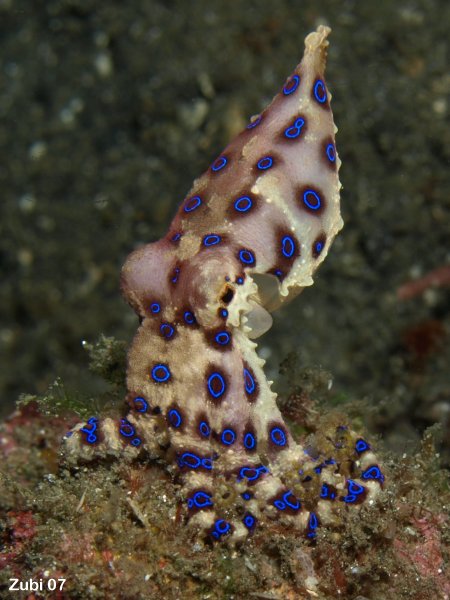 This blue-ringed octopus is probably a seperate species with slightly smaller rings and which is known only from Sulawesi: Hapalochlaena sp4 - more photos