The Tukangbesi Island Group (Kepulauan Tukangbesi) is situated in the western area of the Banda Sea. It is a tropical paradise with beautiful beaches and pristine reefs. Some of the best places can only be reached by liveaboard boat though.

The Wakatobi Dive Resort (description in German) on Tolandono island is the only resort close to the Wakatobi Marine National Park (Wakatobi is named after the four islands that surround it, Wangi Wangi, Kaledupa, Tomia, and Binongko). Most divers usually go there when visiting the Tukangbesi islands. There are more than forty dive sites within a twenty-minute boat ride or less of Wakatobi Dive Resort (around the home island of Tolandono, neighboring Sawa and Lintea, or nearby Tomia - for a description of dive sites around the Wakatobi resort please click here).

On Hoga island there is the base for Operation Wallacea. This operation is named after the transition zone between the two biological realms of Asia and Australia. Click here for more information and a map of Wallacea.

While even the Wakatobi resort with its sheltered areas closes during the wet monsoon period in January and February those islands are closed to fisherman and divers alike during most of the year (weather map Indonesia). Only during about 4 weeks in April and October - that is the relatively calm time between the east and west monsoon - you can visit this area. Our trip took us there at the end of March, beginning of April. The weather was calm and fair, fierce sun during the day and star covered sky at night.

Only a few divers have ever visited the islands east of Wakatobi. Our dive guide Gerry had been here before, but we did quite a lot of exploratory dives. Nearly all the diving was done on very steep walls which drop down to many hundreds of meter. At some dive sites (around Hoga and Karang Kaledupa, Batuata) there are a lot of small caves and overhangs. The water was quite warm (29 to 30°) specially in some of the shallow areas in the lagoons of the atolls. Visibility was always excellent but currents strong, with some very strong down currents.

Actually we expected large fish and even whales (from reports in books and a article in the Asian Diver magazine) but were a bit disappointed since we rarely saw sharks or big pelagic fish. The coral cover though was just excellent - no damage from fishing, boating or diving at any place. There were huge boulders of hard corals everywhere, sponges the size of a man and sea fans 2 to 3 meter across not much soft corals though. Some places with whip corals stretching several meter, whole fields of them. There were not that many small things to see like nudibranchs or other invertebrates. So I recommend this place if you want to see unspoiled coral reefs but not for large fish. Since the temperatures were quite high it is possible though, that on other years there is more fish.

Dive sites in the atolls around Tukang Besi

Anano island: We did a total of 4 dives at the northern most island of Anano. Most of dives we did at the southwest wall. These are very beautiful - around 30 to 40 meter there were huge gorgonian fans and large sponges. We saw some mackerels, rainbow runners and in the upper part a yellow leaffish and some nudibranchs.

Karang Koromaha: this is an atoll, about 6 km across, relatively close to Tomea island in the west. We did several dives, all at outer rim in the north and northwest close to the two entrances to the atoll. The walls were nicely covered with black corals, large sponges, whip corals and gorgonians. We saw a few turtles and Jackfish, on an other dive also some bumphead parrotfish and batfish, but not as many as we expected. The night dive on the wall was great, since we discovered a huge sleeping bumphead parrotfish in a small cave. I really don't know how he managed to wedge himself into it! Unfortunately there was some current, something which I don't like for my night dives.

Karang Koka: this atoll lies to the southeast of Binongko island. The atoll is very large with two entrances in the south and a third in the east. We anchored in the calm area inside the atoll during several nights. At the outer rim on the east we found the best dive sites. During one dive the water was just full of fish, mainly mackerels chasing smaller fish and also an eagle ray. The wall is very nice here with overhangs and small caves. Another dive site I like lies at the south entrance. We saw sharks and really huge gorgonian fans, very impressive!

Moromaho island: this is a small island with a lighthouse. We did all our dives close to the lighthouse in the west. Since we couldn't anchor here we went back to Karang Koka for the night. One of the dives was very strenuous because we encountered a strong down current. My dive buddy had been caught some distance away from the reef and had difficulties to get back up to me. All we could do was hanging onto the reef wall, watching the air bubbles being sucked down and hope it would stop soon! 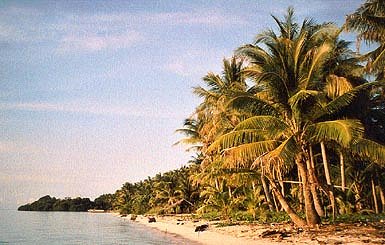 Hoga island: This island is the base for the Operation Wallacea which has a research program going on the islandsin the vicinity. They want to develop a comprehensive management plan to preserve the ecological balance of these islands with its coral reefs and animal life. There are several dive sites:

Hoga Buoy 1 and 2: I liked this dive area a lot. You dive on a wall with a lot of inlets, caves and overhangs. It is also a great place for a night dive. We happen to see a rare event, tube corals and sponges were releasing clouds of sperms and eggs into the water. Visibility was poor but it sure was interesting.

Hoga pinnacles: This is a very nice dive site, two pinnacles on top of which there are many trevallies and jackfish. Just dive around of the pinnacles in a spiral and going slowly up.

Hoga northern wall: This dive site will always be remembered as the worst dive I (ever?) had during that trip! This has nothing to do with the dive site which is very beautiful, a steep wall nicely covered.

Actually we had a very nice dive first, saw some mackerels and a large school of small fish when we came around a corner and saw a large area where the air bubbles of our fellow divers were still hanging in the water like a large ball. I realized, that freak currents had trapped the bubbles, and motioned to my dive buddy to move closer to the reef. Just in time, because a very strong vertical current started and the main group of divers which was in front of us, was swept back and past us, while we were holding on to the reef. We started to do so called geko-diving, that is going up the wall while pulling with our hands, somthing I hate to do, but is sometimes necessary to survive in current like that. The current had changed from vertical to a strong down current, but luckily we now were only in 6 meter depth. While I tried to shelter my camera under my arm, and was holding on with just one hand I looked around. Suddenly the water started to darken!

From the left a huge cloud of debris, pieces of coral, sponges and sand was coming towards us! We just had time to duck and it rolled over us. When a whole sponge swept past me, I realized this was getting serious! My face was stinging from the sand, the air was sucked straight down and I pressed the mask into the corals, so it wouldn't be torn off! I really felt like I was holding on for my life, I didn't want to imagine what would happen, if I let go and was sucked down.

We had held on for about 10 minutes, when two of my dive buddies decided to let go, and try to go up. They actually managed to do it, but two of us held on for longer, and when finally the cloud of debris had passed us, we managed to ascend over the reef flat. On the boat everybody was very anxious, because part of the group was still in the water. Actually one of the divers was too far away from the wall and was sucked down to 36 meter and the rest had to wait on 12 meter for the freak current to abate.

Want to know more about how to assess accurately the rate of current? Click here.

Timor kechil: A slope with nice coral blocks and a sandy area for a nice underwater landscape. Lots of soft corals and large tridacna shells.

Karang Kaledupa: We dived on a nice wall with small caves. There were some very large tunas, a turtle and a large school of mackerels.

Pasarwajo is a small town in the southeastern part of Sulawesi (Sulawesi Tenggara). Look at the map on top.We had heard from our dive buddies, who had been there before, that this place offers excellent muck diving (the diving for the unusual and hidden critters) specially during night. So although we arrived with the Ciska, our liveaboard, just around 11 o' clock at night we geared up and jumped into the water just underneath our ship. We were not disappointed on our midnight dive! Between old shoes and packs of cigarettes, tree trunks and seagrass we found a stone fish, some waspfish, a large octopus, a Spanish dancer and other large sea slugs and rare nudibranchs, as well as poisonous sea urchins and a twin spot lionfish.

Batuata: We dived here on our way from Tukang Besi to Selayar. This island is actually more like a large rock lying out in the middle of the ocean. We dived on a wall with quite a lot of current. A huge Napoleon wrasse accompanied us for a while and we saw several turtles. The second dive was on a wall with a lot of overhangs and small caves.

Bau-Bau, Siompu island: There is now a dive operator based in Bau-Bau on Buton island (Wasage Dive Club) which offers dives in the Bau-Bau area, Pasarwajo, Siompu island and also as far as Hoga island in Wakatobi.

You can find detailed information about dive operators, liveaboard operators, dive safety, dive conditions, climate, hotels and how to get to Pasarwajo and Muna in South-Sulawesi on a separate page ready to print.