The Tubbataha Reefs were declared a National Marine Park in 1988 and a UNESCO World Heritage Site in 1993. The park is the home of numerous marine species. Most divers visit this area because of the chance to see large pelagics such as sharks, mantas, rays, turtles, mackerels, tunas and barracudas but we also saw interesting smaller animals such as nudibranchs, special crabs and shrimps and corals. The reef is very rich in fish, large schools of different species practically covering the corals and visibility at some days is just unbelievably good.

Map of the islands north of the Tubbataha reefs (print version)

The Tubbataha atolls lie 182 km southeast of Puerto Princesa and are part of a larger group of tiny islands that stretch from the northeast to the southwest, compromising Cagayancillo, Caluse, Cavili, Arena, then the Tubbataha reefs, Bastera (Maeander Reef), Bancoran, San Miguel islands and Cagayan close to Borneo. However these islandsdon't belong to the National park and thus are not protected. Actually I heard there is quite a lot of fishing going on in the south, even with factory ships.

Some words about the diving

The Tubbataha Reefs can only be reached by liveaboard boats and only from the end of March to June. The ships must use the moorings or cruise and may not anchor in the park area. If the weather is bad with a lot of wind and high waves it is nearly impossible to moor around the Tubbataha reefs, because there is no shelter what so ever! Some liveaboard ships are quite small and it can become very rocky if the waves start!

All these reefs consist of vertical walls or very steep slopes and are rising from great depths. You must expect strong currents that might change directions so most dives are drift dives. I advise to bring a dive computer and a safety sausage or another signal device. Night dives are only possible if there is no current. Check before starting your dive and discuss who will pick you up, if a current springs up during the night dive.

Want to know more about how to assess accurately the rate of current? Click here

You can find detailed information about dive operators, liveaboard operators, dive safety, dive conditions, climate and how to get to the Tubbataha Reef on a separate page ready to print. Also information about Apo Reef (Mindoro) and wreckdiving in Coron Bay (Sangat, Busuanga).

The Tubbataha reefs consist of two atoll-like reefs each with an inner lagoon and are separated by a 7km wide channel. On the larger atoll there is a small island, more like a sandbank. Bird island as it is called used to be only sand. Now covered with some trees supposedly planted by a dive operator, there are not that many birds anymore. This sand cay is also used as a nesting ground by marine turtles. More maps on the website of the Tubbataha Reef National Marine Park.

Bird island (Tubbataha north face): this is a steep wall with overhangs, swim throughs and crevices. Some areas have sand trickling down from above like a waterfall and there is a corner where you feel strong currents coming from both sides. The reef top is quite nice with lots of hard coral heads and sandy areas in-between. There are always several sharks resting on the sandy area. One of them was lying there so quietly getting cleaned by its Remora fish, that the garden eels around it were coming out of their holes! On one dive we also encountered a giant reef ray, easily about 2 meter across, who was resting on a ledge and took off, when we approached.

Ranger Station: There is a channel going to the ranger station. Actually we didn't dive there, so I can't give any details.

Malayan Wreck: You can see the remains of a Malayian ship that stranded here from the mooring place. We stayed here for a couple dives and enjoyed it immensely. During one dive we had a lot of current on one of the corners and lots of fish hanging around there, a large group of dogtooth tuna and even an eagle ray. Afterwards on the reef top we saw some moray eels, angelfishes, butterflyfishes and other smaller reef fish as well as some lobsters, starfish and flatworms.

Amos Rock (Southwest Rock): I liked this dive site a lot. The wall is wonderfully covered with huge gorgonian fans and whip corals and if there is some current this place is just chock a block with large fish! We saw so many sharks I gave up on counting, mostly white tip reef sharks and gray reef sharks. There were plenty of mackerels, snappers, some large groupers, several Napoleons, some of them real granddaddies and all of them moving in the current - a wild ride!
Around this area we also had a very interesting night dive. We checked the current, but towards the end of the dive we had to dive back to the ship against the current. This was one of the best night dives in this area. We found a lot of nudibranchs, some like the huge Pleurobranchus forskali (ca. 30cm!) or the rare Atagema (Trippa) intecta. On a so called broccoli coral I found a small pink crab, Hoplophy oatesii, that is perfectly camouflaged. There were a lot of lobsters, large crabs to be seen. Twice we saw the shy twinspot lionfish.

South Rock: Steep wall with a lot of gorgonian fans, some overhangs. We encountered a large group of tunas and longface emperors. On the sandy areas there are always a lot of sea cucumbers like the special looking Thelenota ananas. As during nearly every other dive we saw several turtles, some of them not shy at all, so we could watch them from close up.

Black Rock: Steep wall not covered with much corals. In-between sandy channels coming from the reef top. There were some sharks patrolling, mostly white tip reef sharks and a few Napoleon wrasses. At the very end of the dive we encountered a manta ray on the reef top. It stayed around us for quite a while - that made my day!

The name of this reef is also written as Jezzly Beazley on some maps. This reef lies about 23 km northwest of the Tubbataha reefs but is not protected as a Marine Park, so fishing is allowed here. The reef here is so small, you probably have visited it in two dives. This place is not sheltered at all, so the dive operators will only stop there, if the weather is calm. The reef is covered with corals and gorgonians and large schools of fish. The southern part of the reef has an extensive reef top. Currents can be strong.

The islands north and south of the Tubbataha reefs:

Arena island, 89 km northeast of the Tubbataha reefs and Cavili close by are small coral islets and sand cays with fringing reefs. Arena has a lighthouse and seaweed farms. Further north lie Caluse and Cagayancillo, both surrounded by reefs. This whole area is not so nice to dive, since there has been a lot of dynamite fishing and large parts of the reefs are destroyed.
Bastera (Maeander Reef) is a sand cay 93 km southwest of Tubbataha south island. The wreck of the Oceanic lies on the east side. Bancoran island, a further 60 km southwest of Bastera, is densely wooded and inhabited. I haven't visited any of these islands!

Diving: I didn't dive when staying on the mainland but I heard there is some nice diving in Honda Bay (Dos Palmas), Fondeado island near Castillo point, the Panglima reef near Pasco point and Table head reef which lies south of Puerto Princesa. In the north of Palawan you can also dive in El Nido and Port Barton. Look at this page with dive information. 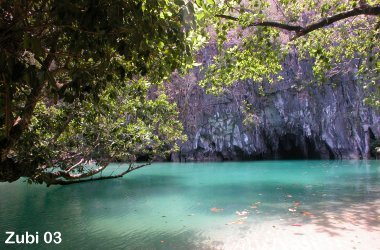 Land trip: Instead of diving we made a trip from Puerto Princesa to the underground river in Sabang. The resort we stayed in Puerto (Casa Linda, a very nice and quiet place) organized an aircon van for us and after driving through clouds of dust stirred up by the bus in front of us I was glad we didn't go by public transport! The trip over the small mountains, along the coast and over some hills with beautiful limestone formations was very enjoyable.
The underground river, also called St. Paul Cave, is a very large tunnel like cave and lies inside the St. Paul Subterranean National Park. To get there you either walk (shorter walk ca. 1 to 1 1/2 hours, jungle walk about 2 hours) or take a small banka boat. There is a nice lagoon in front of the entrance to the cave. I had my swimming gear along and took a dip. I swam even a little inside the cave and watched the swallows flying out of the entrance and over my head. The park rangers didn't like that so much...!
To visit the cave the park rangers will take you in with a boat. They have car batteries along, so you have strong lights to look at the formations inside the cave. We made a trip of about 45 minutes and enjoyed it very much, it was very impressive. Try to go with only a few people on the boat, this place doesn't need people constant chattering.
Before we turned around to paddle back I asked the ranger, if we could turn out the lights. That was very special, since inside a mountain you really don't have any light (not even the stars). As we sat in pitch darkness we started to really hear the twittering of the bats all around us and the calls of the swallows that had followed our lights inside the cave, on our skin we felt a slight wind and our boat was tugged by the current back towards the entrance!

These islands lie in the northeast of Busunga. There are some resorts with dive operators. For details please look at the websites in the information section.

Check out this separate page with a lot of information about the world war II wrecks in Coron Bay.

Apo Reef is an atoll of about 40 square kilometer with a small island in the east. 1996 Apo Reef was declared a Protected Area. Apo Island even has a small mangrove forest and lake at its center. Apo reef is often reached by liveaboards from Busuanga, Palawan, so I added a short description of this great dive site to this page. 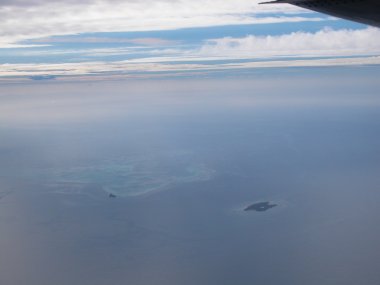 Apo reef and Apo island as seen from the air

You can find detailed information about dive operators, liveaboard operators, dive safety, dive conditions, climate and how to get to the Tubbataha Reef on a separate page ready to print. Also information about Apo Reef (Mindoro) and wreckdiving in Coron Bay (Sangat, Busuanga).